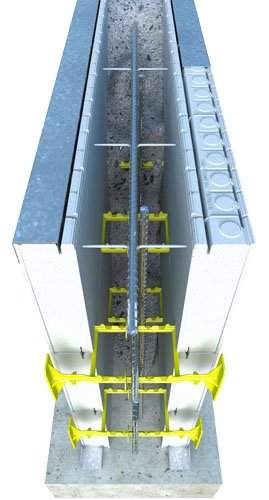 QPX3 is Now the "Ultra Panel"

The 3⅛" thick, R-28 Ultra Panels provide Ultra Value with 30% more insulation and 20% higher strength at costs comparable to R-22 ICFs. The common names for our other EPS panels remain unchanged: Regular, Plus, and Extra.  The Quad-Lock team is happy to see rapid adoption of the Ultra Panels in so many projects. We'd like to thank you for presenting the Ultra Panels' unique value proposition to your clients and choosing to build with it!

And most of us remember XPS for its use of ozone-layer depleting CFC gases before the early 1990s, and less ozone-layer depleting HCFCs since then, which the EPA is now considering to ban as well. The HCFC escapes from XPS at a pretty slow rate. In contrast, EPS uses pentane as the blowing agent which is replaced by air within the first few months after manufacture, with the first 50-85% of pentane being replaced before shipping. The XPS manufacturers chose a specific HCFC with lower thermal conductivity than air, allowing them to claim higher R-Values per inch thickness than EPS because the relevant laboratory tests are relatively short-term at 180 days or 5 years. But after 15-20 years the reality can be very different.

So our EPS Industry Alliance has commissioned more tests of long-term field-performance and just released a Technical Bulletin in their "EPS Below Grade Series".

XPS R-value loss reached more than 80% in some cases, which means a 2-inch thick XPS board originally advertised as R-10 would actually perform at less than R-2!

EPS R-Value loss in a 2008 test of side-by-side, below grade application following a continuous 15-year installation period was only about 6% due to limited water absorption (<5%). So a single Quad-Lock Regular Panel with an original insulation value of about R-9.5 would still perform at about R-9. 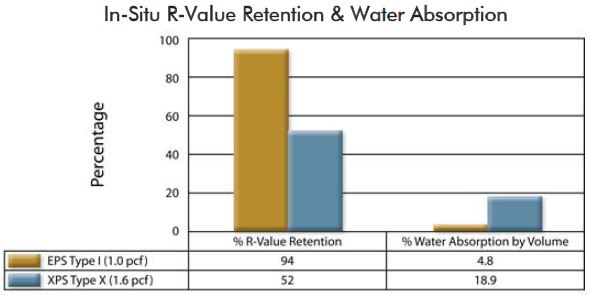 A large part of this difference must be the "sealed-off" nature of XPS foam cells, which the XPS industry touts as being superior because it slows down the exchange of water, vapour, and air. That's good for short-term laboratory test to claim superior material properties, but over the long lives of actual buildings, XPS admittedly looses the HCFC gases getting it replaced with whatever is around it: air, if you're lucky, but in some installations, especially below-grade or in roofs, with water!

The "sealed-off" nature also seems to cause a lack of drying capacity of XPS versus the significant drying potential of EPS, as reported in another EPS Industry Alliance test and bulletin per ASTM C1512 "Standard Test Method for Characterizing the Effect of Exposure to Environmental Cycling on Thermal Performance of Insulation Products".

Combine the two factors and water-logged XPS "non-insulation" can result. So the XPS industry seems to have cherry-picked both the laboratory tests for allowable moisture absorption AND for R-Value determination based on a gas that escapes from the product. The clear losers are building owners whose insulation became almost useless, costing them energy and possibly large sums for remediation.

In response to the EPS Industry Alliance bulletins that report on tests conducted per established standards (e.g. ASTM) and/or by an independent testing laboratory, Owens Corning promptly developed a "Science Doesn't Lie" tagline and website where they proceed to do just that - lie - about EPS and XPS. A number of brochures and a video heavily rely on unrecognized, made-up "tests", such as syringe injection of water into foam and digging a hole in the ground to bury samples for three weeks. And, of course, they keep repeating the cherry-picked, short-term laboratory tests.

Our EPS Industry Alliance directly disputes any false marketing claims by XPS manufacturers. They also took over the role of the ICFA, and rely on membership dues to support all these initiatives, so please join if you can!

Quad-Lock products passed another crucial fire-test that was conducted under both the NFPA 286 and ISO 9705 standards.

The NFPA 286-11 is the latest iteration of the "15-minute room corner fire-test" for many North American jurisdictions, and the ISO 9705:1993 is the equivalent for most of the rest of the world.

These "Fire Tests for Evaluating Contribution of Wall and Ceiling Interior Finish to Room Fire Growth" demonstrate that Quad-Lock products finished with ½" gypsum board, per our recommendations, should provide building occupants enough time to evacuate in the event of a fire.

Test Setup:
Quad-Lock Plus Panels were installed on the interior, as they represent the thickest panel and highest available fuel-load recommended for installation on the interior. Similarly, Quad-Deck 12.5" thick panels were used for the ceiling. The interior of the room, both walls and ceiling, was finished using 1/2 in. thick non-fire rated gypsum board. A burner in the corner of the room fired for 15 minutes and measurements of room temperature, smoke release, heat release, and heat flux to the floor were taken. 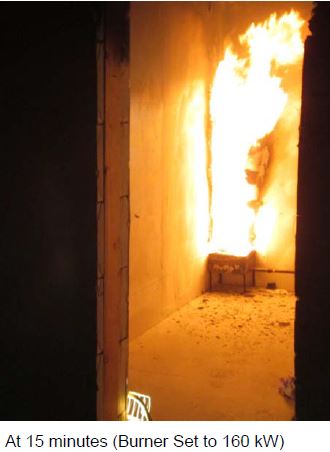 Findings:
The Quad-Lock Plus Panel and Quad-Deck Panel ICF System met the requirements of NFPA 286-11 and ISO 9705:1993. The gypsum board on the walls and ceiling remained attached.

We added the results to our Building Code Compliance webpage.

Douglas Bennion updated our Code Reference documents for Canada's NBC 2010 and the International Codes 2012 IRC/IBC/IECC. The documents are available online to registered users at the top of the pages for Manuals and Typical Details.

The 2012 International Codes have been adopted to varying degrees by about 25 jurisdictions/ states in the USA. Though we've been working toward this for 20 years, we are pleasantly surprised by this rapid implementation and expect that the cost differential of wood-framing vs ICF will shrink significantly in many jurisdictions due to additional requirements for framed walls, such as continuous insulation and blower-door testing. Together with stricter codes for many hurricane, tornado, and flood areas, all of us should be well positioned to grow our businesses!

Green home building expected to double by 2016 per NAHB

Located on the Caribbean island of Curaçao in the Dutch Antilles, this project began as an addition onto a colonial bank building originally built in 1778. The addition needed to mimic the finish details of the original bank and also withstand the harsh tropical climate, which has high year-around temperatures, ocean salt-spray, and the threat of hurricanes. Finally, because of the climate, air conditioning is a must for commercial offices, but it comes at a very high cost for traditional block-constructed buildings because electricity is very expensive. Congratulations to Arjen!

Georgie Award for BC Home

Sopka Development Corporation's Quad-Lock home in W. Vancouver was honored with the Georgie Award 2013 Winner - Best Single Family Home over 2,000 Sq. Ft. The 3,600 sq.ft. beauty had a total utility bill of $100 for Dec. 2013, one of the coldest months we have had in Vancouver for some time. Neighbors in an older stick home paid $650 for the same period! Congratulations to Ivan and Dave!

This home is located on the east side of Mobile Bay in Alabama where hurricanes and flooding are a major concern. The homeowners chose to invest in a safer, healthier and energy-efficient home that provided safety for their family, reduced maintenance costs and cut their environmental footprint and energy costs. This home meets and surpasses the Insurance Institute for Business & Home Safety (IBHS) "Fortified for Safer Living®" program.

St. Margaret Mary's Church stands tall and magnificent above Bullhead City, AZ. The overall height of construction set new standards for unsupported ICF walls (over 68 feet tall) through the use of columns and curtain wall design standards typical in the high rise industry. The completed structure is an outstanding example of a complex building constructed with Quad-Lock ICFs, providing the desired architectural elements, energy savings, and sound attenuation.

Cliffside Home Perches Over a 45 Degree Slope in BC

To take advantage of the panoramic view over Lake Okanagan, the homeowners set out to build something different and unique.  They chose Quad-Deck to allow them to have the exposed concrete on the interior and the insulation on the exterior.