Fact or Fiction: "The R-value tells me how much energy my building will use, right?" R-value measures the resistance a material has to conductive heat transfer, this much is true. R-value alone, however, does NOT fully describe the energy performance of a building. Everyone in the ICF community knows that ICF buildings far outperform framed buildings with comparable stated R-values in terms of energy efficiency and comfort level, but why is that? Let's look at the main factors affecting actual energy performance of a building: Thermal Conduction, Convection, Radiation & Mass.

Thermal Conduction is the heat transfer through a material by contact of one molecule to the next. This is the only factor an R-value measures. 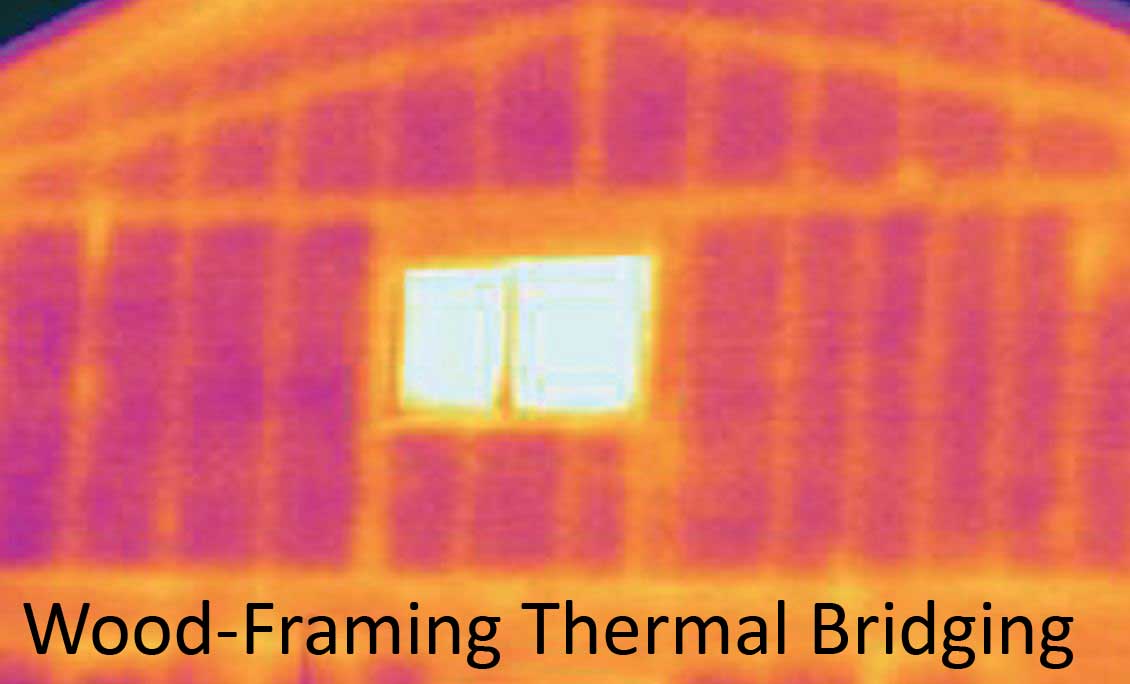 Thermal conduction is not the only mode of energy loss in a building. In fact, conduction often contributes less to energy losses in wood frame buildings than convection, which is not even measured by R-values. 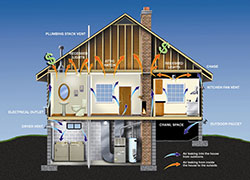 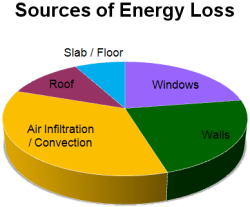 Source of energy loss in a wood frame building*

Thermal Convection is heat transfer by movement of currents within fluids or gases. When considering energy performance of buildings, it's air moving between the inside and outside or "air infiltration". A common measurement is 'Air Changes per Hour' at a blower-door induced pressure differential of 50 Pascal (ACH50). US Energy Star standards for new homes require less than 3 ACH50. In comparison, Canadian R-2000 standards are 1.5 ACH50, and Swedish standards are 0.5 ACH50 or less.

Adequate air exchange must be ensured in airtight buildings, typically with mechanical ventilation that can be combined with 'heat/energy-recovery' units or ground heat exchangers for additional savings where conditions & budgets allow it. Allergen filtering is also easy to incorporate, and in 100% ICF buildings air humidifiers can be added due to the very low risk of condensation in the building shell.

Thermal Radiation transfers heat via electromagnetic waves, which for buildings are mostly the sun's rays. Depending on factors like site & location of the building and the prevailing climate, Passive Solar Building Design helps optimize a building's absorption and reflection of solar radiation through solar orientation, placement of windows and shading elements, choice of finishes, and incorporation of thermal mass.

Thermal Mass refers to a material's capacity to store heat. Concrete and (Adobe) bricks have high thermal mass, which can act like a battery for heat. The classical use of thermal mass is in desert climates where outside temperatures swing above inside temperatures during the day and below at night. High mass building shells can store the heat from the outside during the day and release some of that heat to the inside at night - keeping the inside comfortable using almost zero energy. In temperate climates, thermal mass is best used in combination with the principles of passive solar design, e.g. let the winter-sun heat high-mass floors through windows.

The superior thermal performance of insulated concrete forms has been proven in recent side-by-side tests per ASTM standards:

All of the above translate into significant ongoing energy savings and savings from smaller sized HVAC equipment. 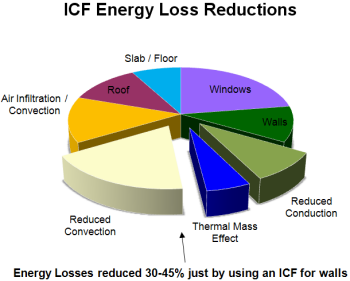 Getting back to the original questions, the answers are...

"No - the R-value of one component alone does not tell you how your building will perform". Remember, the Building Code is only a MINIMUM standard and there are many factors that influence actual energy performance.

"Yes - ICF buildings far outperform framed buildings despite similar advertised R-values". The secret lies in the combination of reduced conduction & thermal briding, less convection, and high thermal mass. The result is a building with a lower appetite for energy and vastly improved comfort inside the building due to more consistent temperatures and lack of drafts. Plus you get superior sound absorption and greatly reduced risk of condensation, rot and mold.

Every building should be considered from a 'whole system' perspective and designed using an integrated systems approach. Besides walls, roof and slab, windows also have a significant impact on performance since they usually make up 10% to 20% of the total wall area and vary widely in energy performance. Energy Raters and some engineers & architects now offer energy modeling services that will paint a much more accurate picture of how your building will actually perform. A small investment in a computer analysis helps in formulating the best-value design of a building to save tens of thousands in energy costs, even hundreds of thousands for larger buildings, over a building's lifetime. 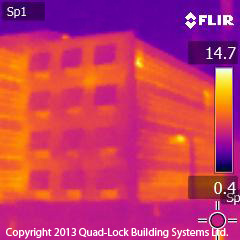 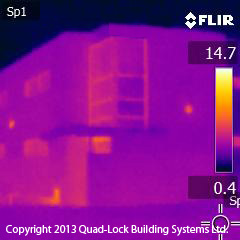 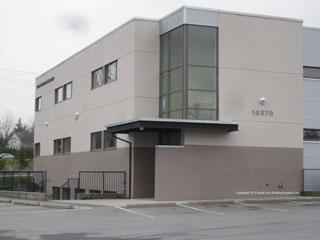 Light = Warm / High Energy Loss (when heating)
Dark = Cool / Low Energy Loss (when heating)
The images of these two nearby buildings were taken on the same winter day. The Quad-Lock church is largely cool outside due to the efficient walls and efficient windows. The conventional building's walls are almost as warm (light) as its windows - they are heating the environment and we can almost see the dollar bills being thrown out the windows.

Links to other websites:
Passive Solar Building Design
Green Hotels with ICF
EPS and the Environment